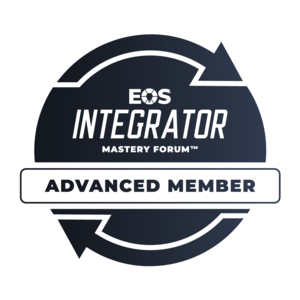 Without a strong Integrator…The Visionary is just a dreamer.

It takes two types of leaders at the helm of a 10-250 person entrepreneurial organization to hit the next level. They’re known as the Visionary and the Integrator. Source: Mark C. Winters and Gino Wickman from the book, Rocket Fuel.

Visionary…are you ready to find your other half, an Integrator, to grow and expand your company?

Ready for more profit, greater reach and increased freedom in your business? 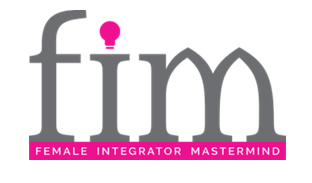 From Corporate Healthcare to Fractional Integrator: My Journey to Help the Visionary CEO August 19, 2021
Use Your Team’s Kolbe A™ Results to Give Your Business an Extraordinary Advantage August 18, 2021
How Do You Know You’re Ready for an Integrator? June 28, 2021
Make the Boldest Decision You Possibly Can To Grow Your Business by Hiring an Integrator May 22, 2021
Are All Your Business Arrows Pointing in One Direction? April 17, 2021 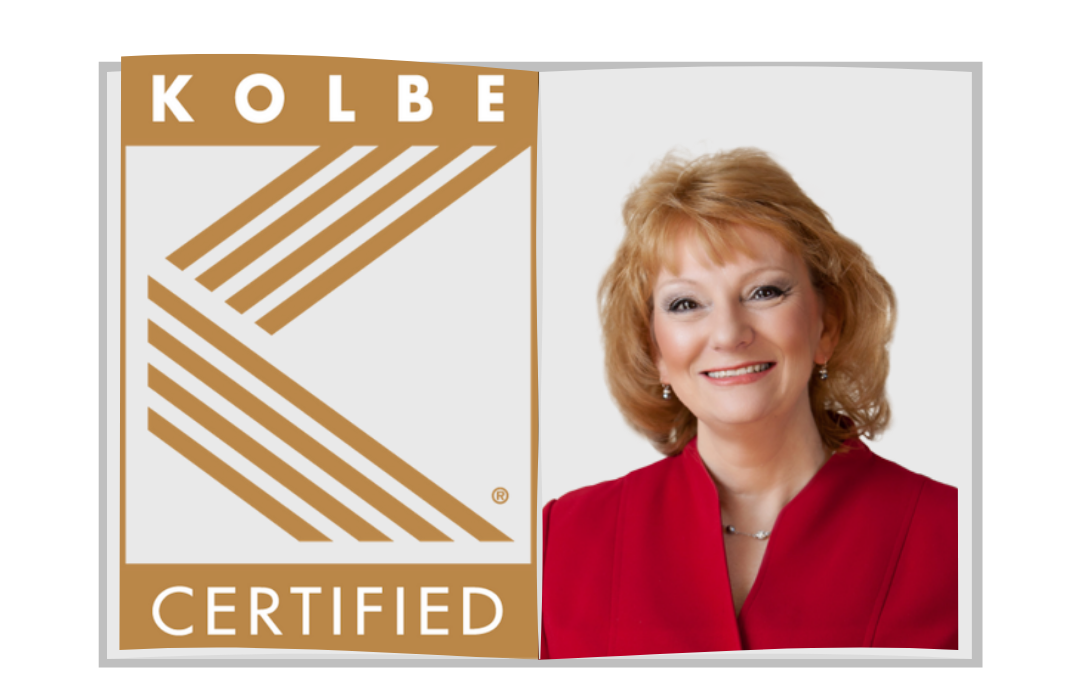 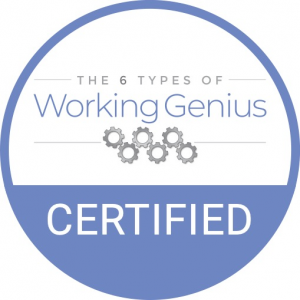 Creative Instincts - The Keys to Productivity 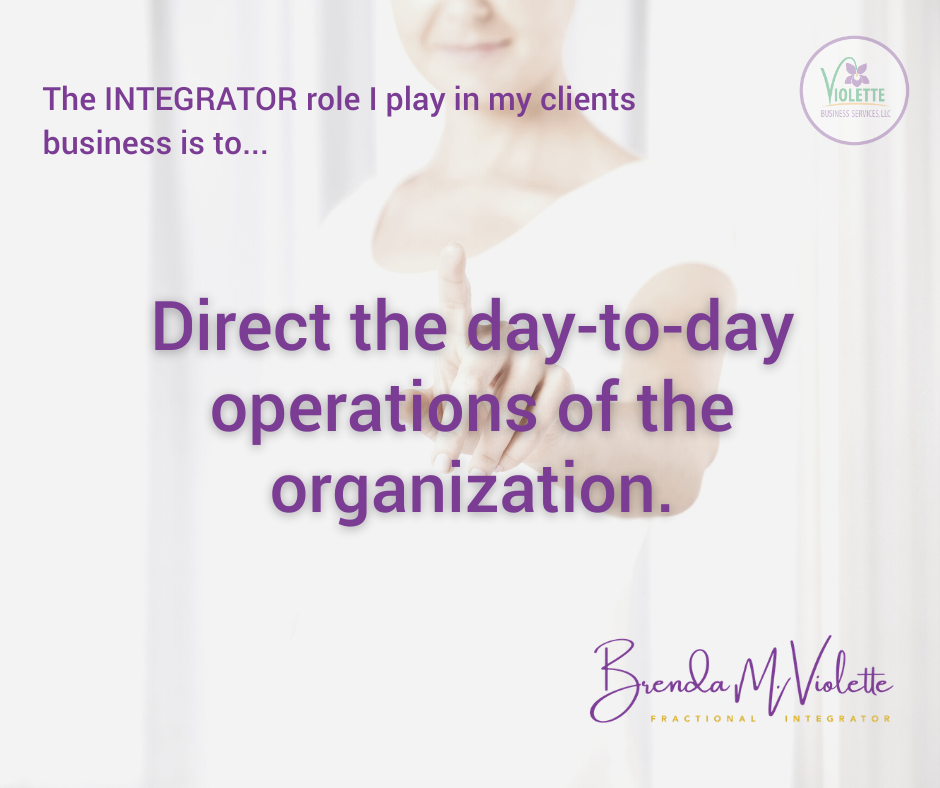 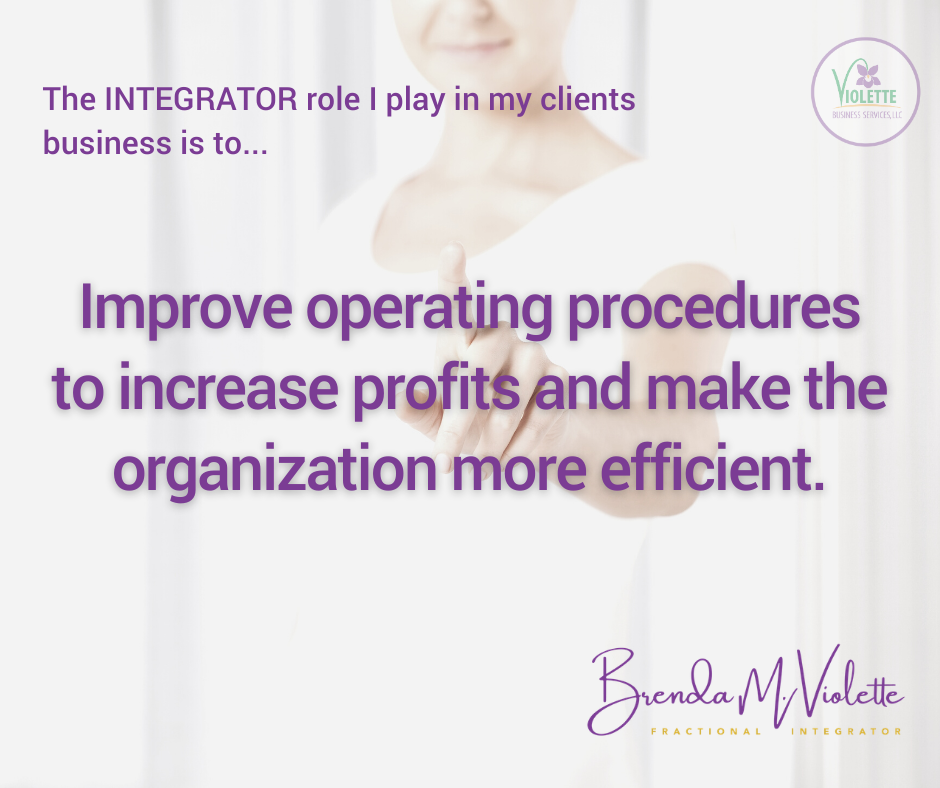 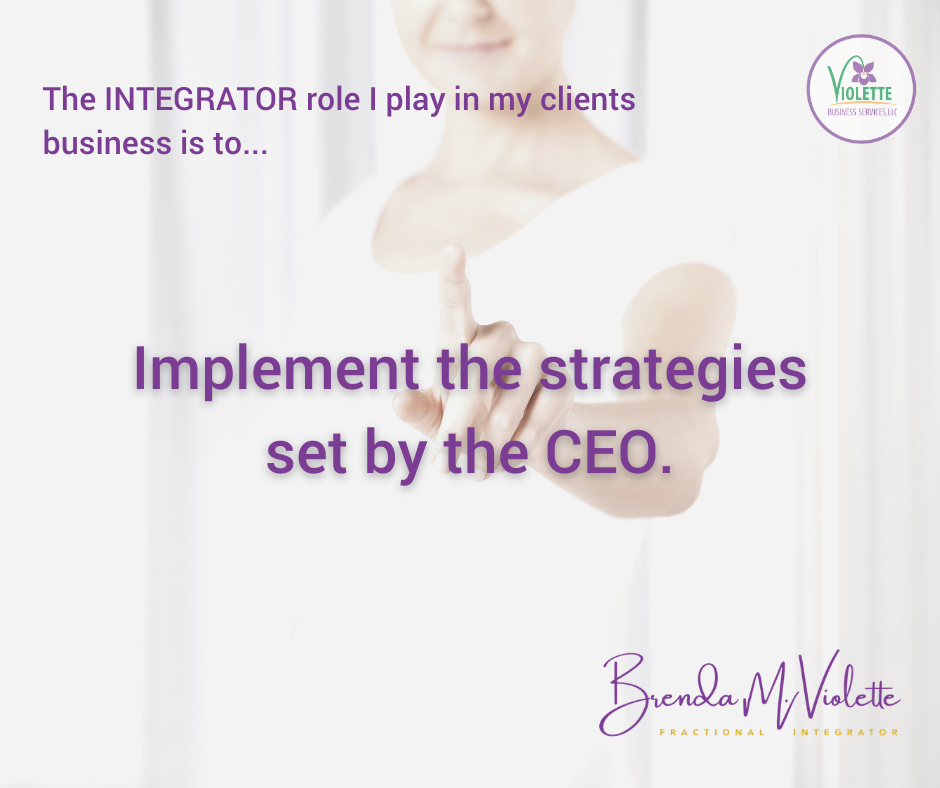 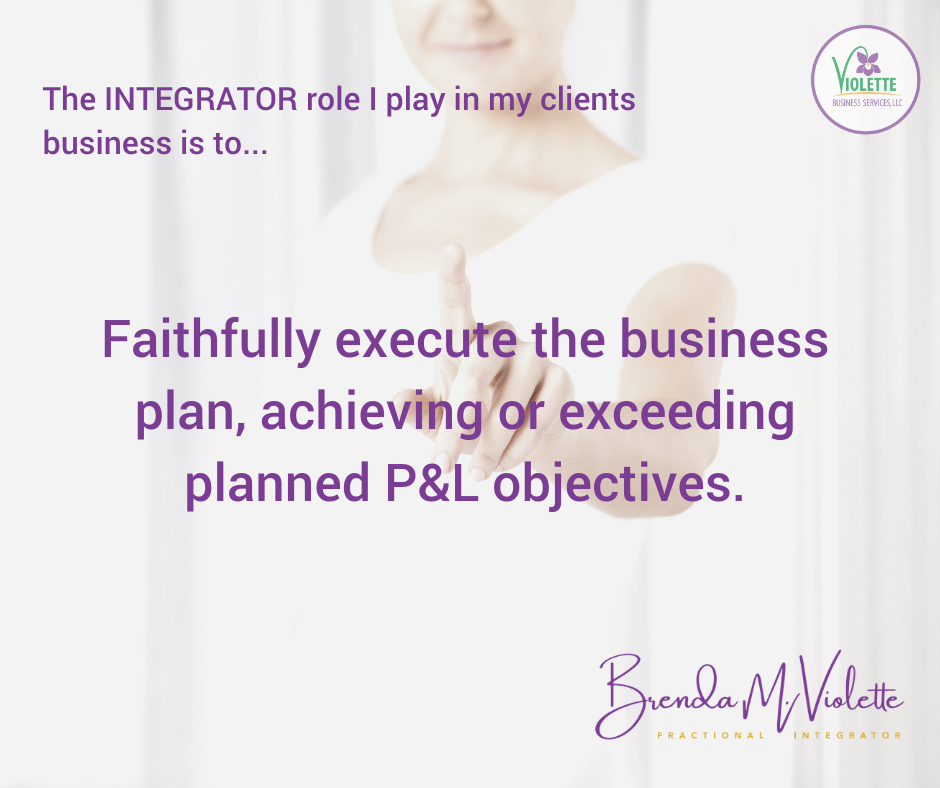 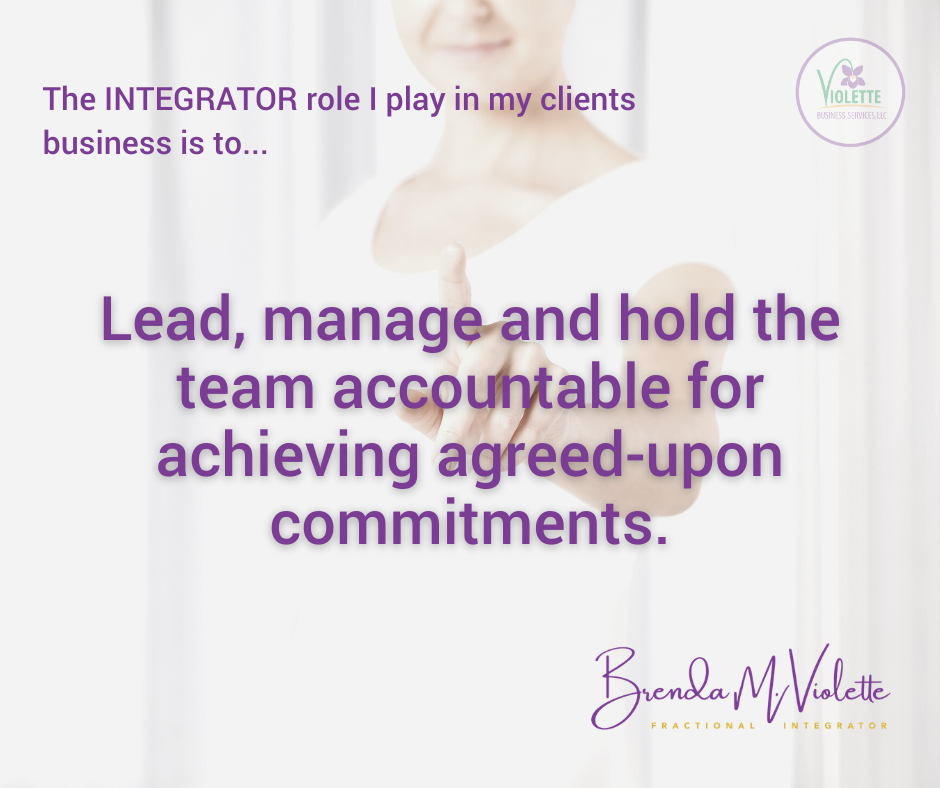 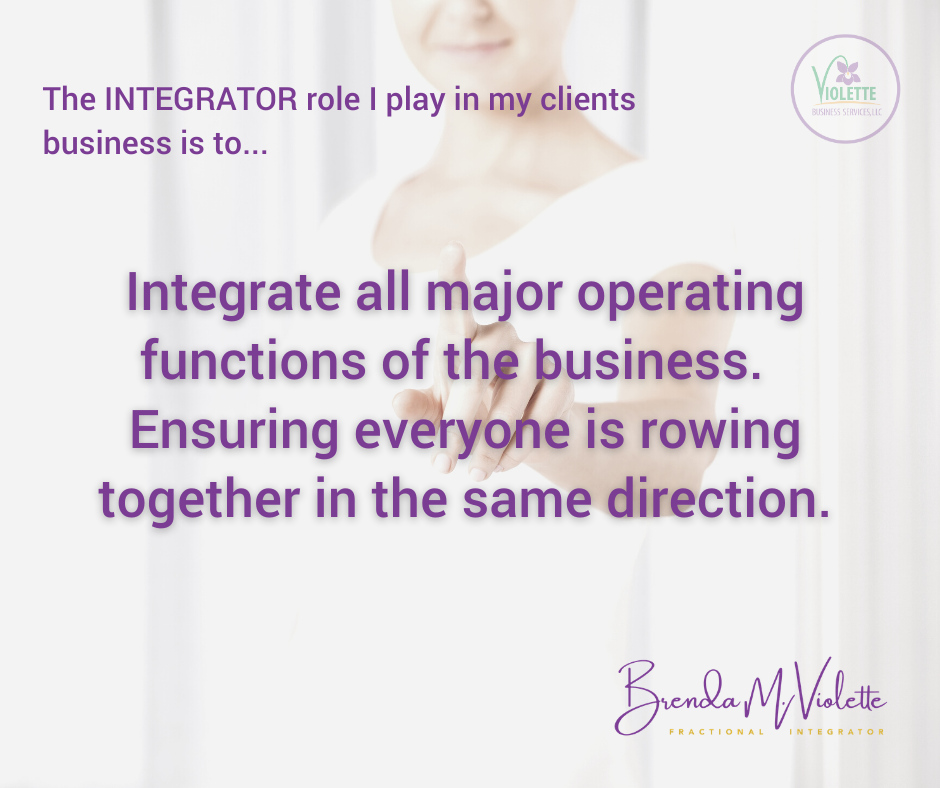 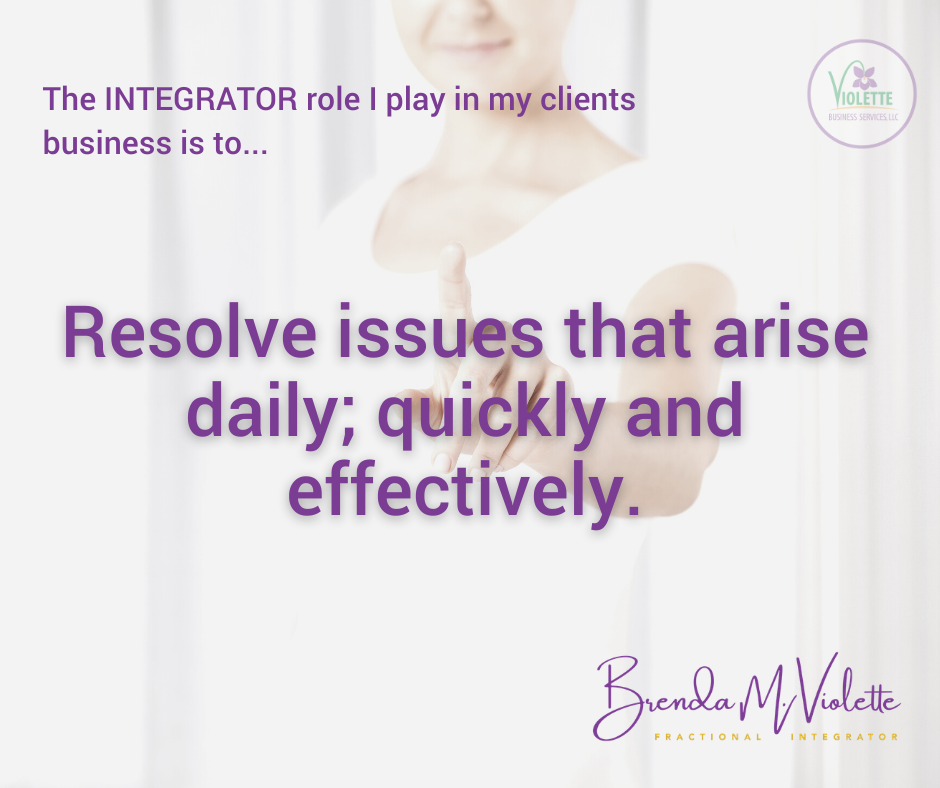 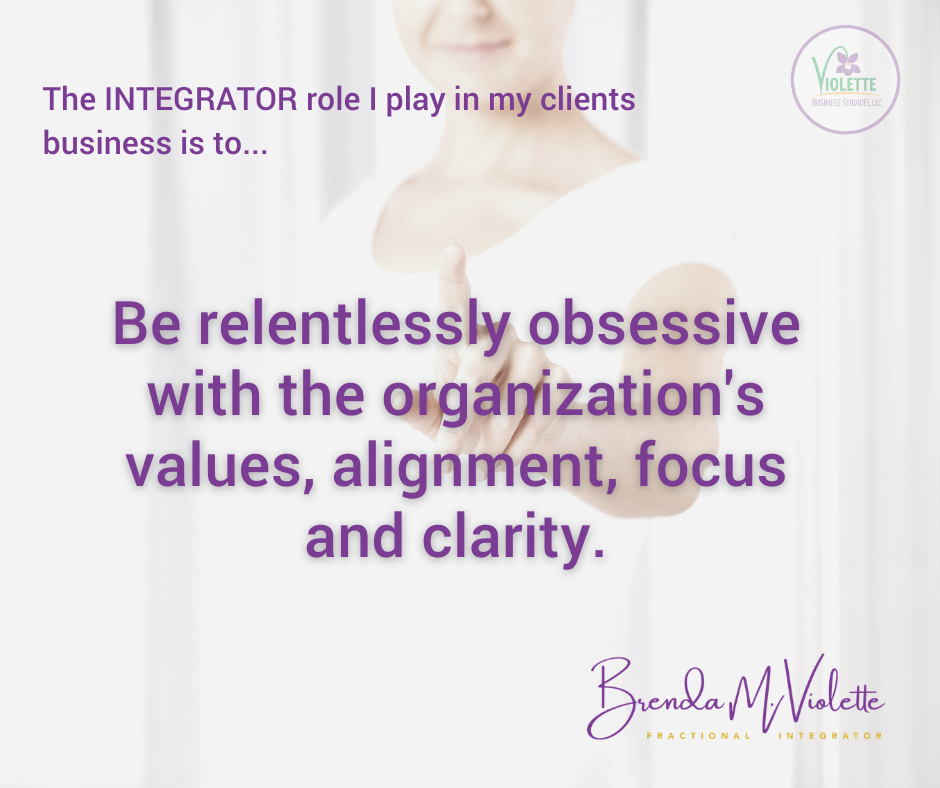 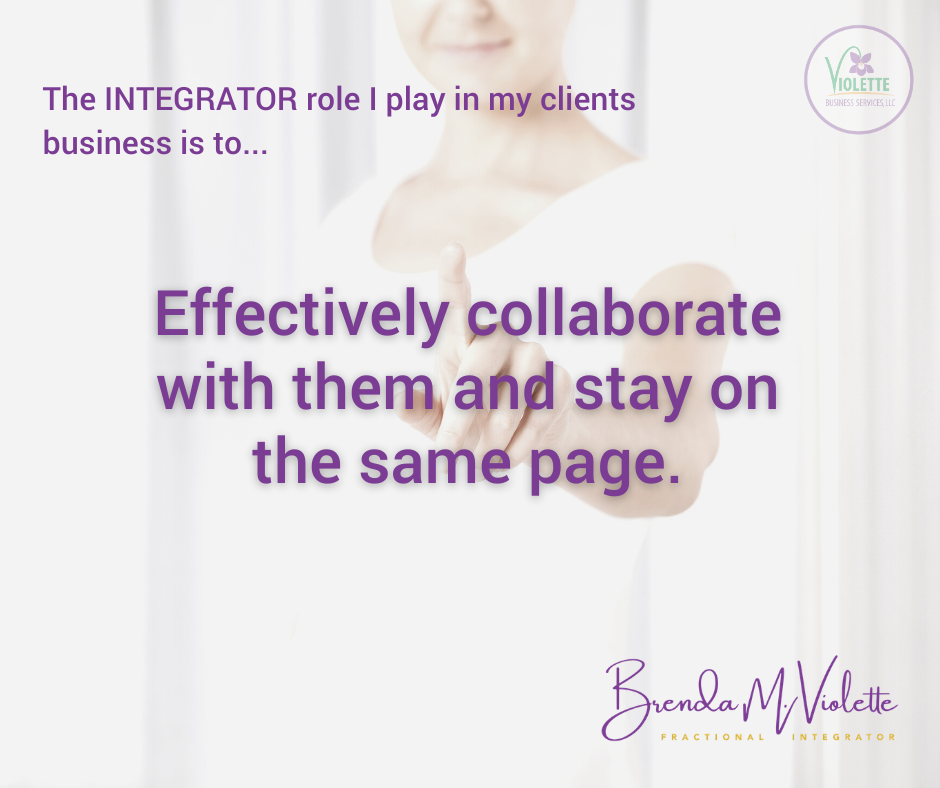 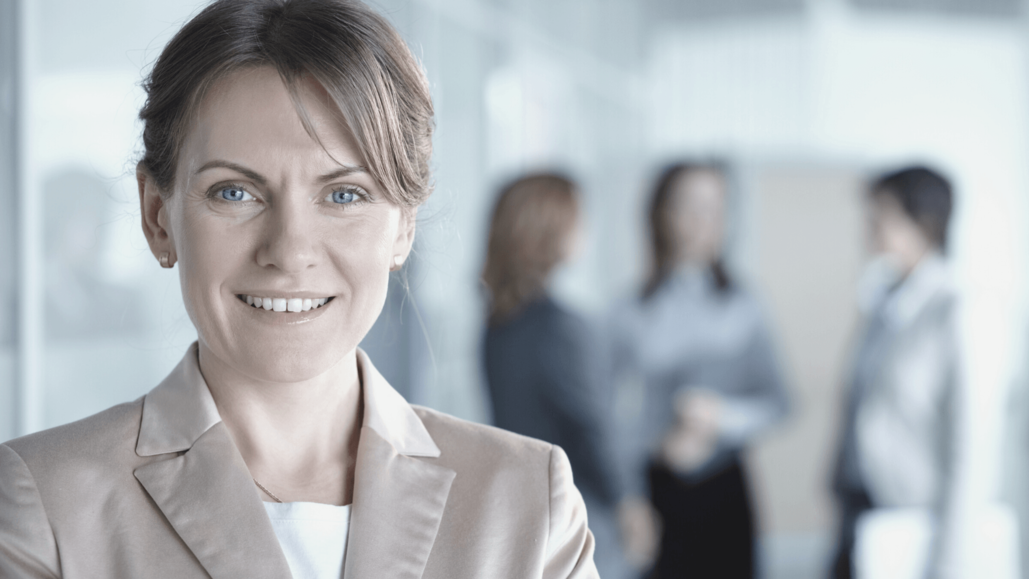 Are You Leading Your Team or Micromanaging Them?

Are you leading your team or micromanaging them? If you're like most business owners, you daydream of having a winning team that supports your growing company.

Are you leading team members to be successful and engaged in your vision, or are you stuck in the ineffectual approach of micromanaging them?

In this article, we’ll look at the leadership style of micromanaging teams.  And, how this style has a negative impact on company growth and relationships.

What’s the Difference between Managing and Micromanaging?

You may unintentionally be blocking the expansion and financial growth of your business by micromanaging your most valuable company resources - your team.

According to a Harvard Business Review article, “Signs That You’re a Micromanager” the difference between managing and micromanaging is the focus of the “micro’.

At the core of moving away from micromanaging is letting go of the minutiae.

If you’re like most micromanagers, you probably don’t even know that you’re doing it.

When Business Owners and Their Managers Lead by Micromanaging.

It’s an undeniable fact. When leaders micromanage, their people are not fully engaged in the company's vision, mission and goals.  This lack of engagement contributes to loss of momentum in growth and expansion.

The business takes a hit when the leader and it's manager try to control every aspect of how team members perform their role or even tasks within their roles.

Actually, micromanagement is a complete waste of everyone’s time!

And, this style of management does more harm than good for the organization’s success and productivity.

It suggests the leader must have total control, doesn’t trust the team or doesn’t have faith in their ability to do the job.

The role of the Visionary CEO leader and their leadership team is to provide guidance and support. 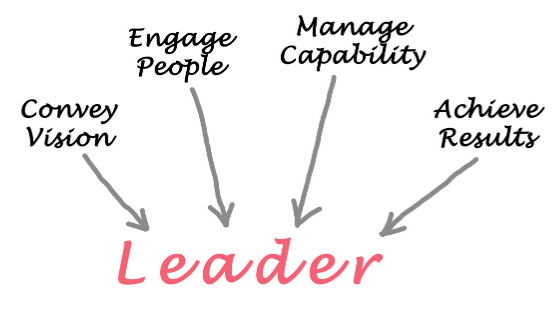 The organization’s is best served when the leader facilitates a healthy company culture where team members are free to perform at their best.

The micromanagement style of leadership stifles creativity and innovation in your company. 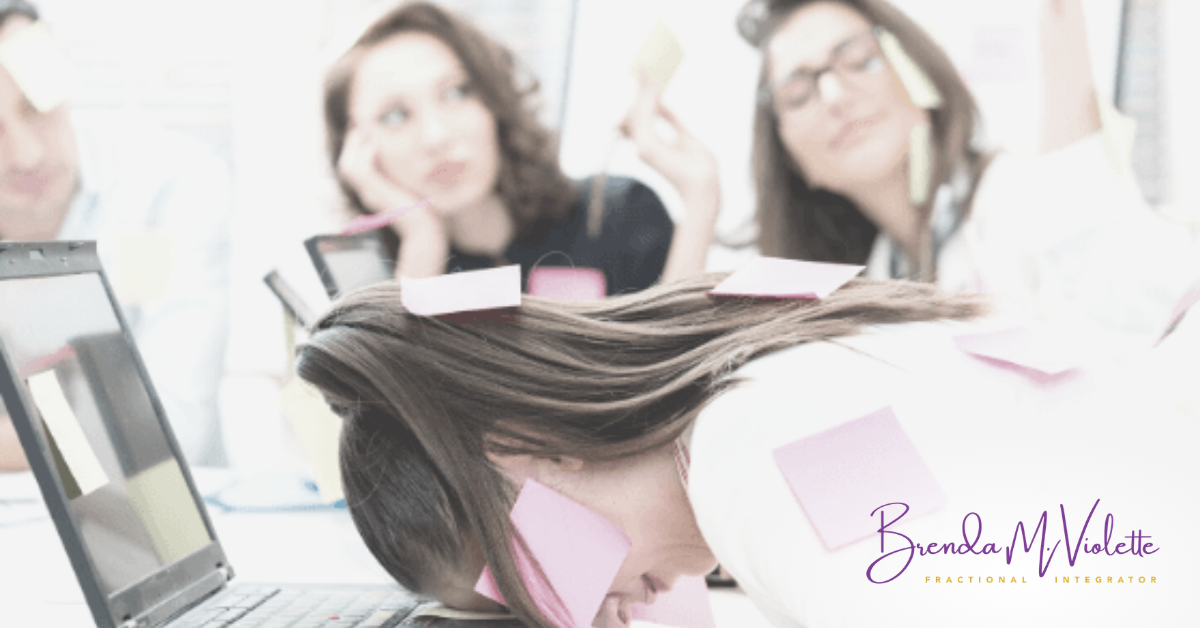 When you insist that all decisions must go through you and every idea is scrutinized, your team members will stagnate.

This brings about immense frustration and anxiety for the CEO leader and their managers.

The company’s momentum and growth are bottle-necked.

Most often the team member:

If you’re a business leader who feels you must control everything, you may want to take some time to evaluate your leadership style.

How does your need to control everything move the business forward?

Some Common Signs You May Be Micromanaging Your Team. 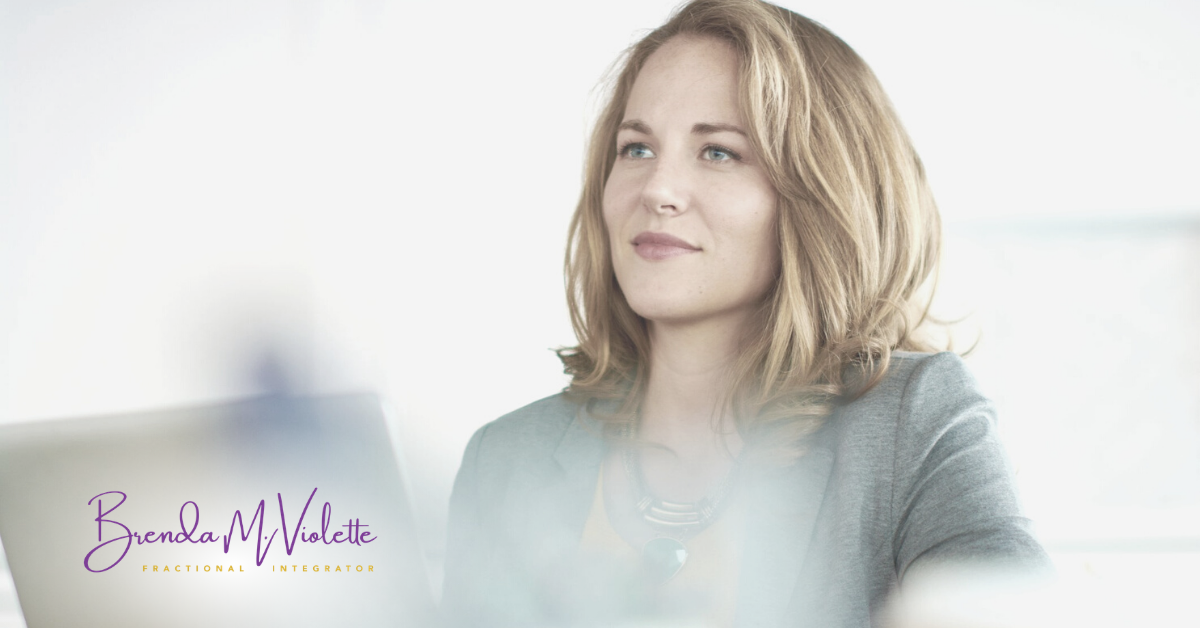 Do you recognize any of the following signs in your leadership style?

There are no judgments here.

It’s never too late create new leadership habits that will prosper the relationships you have with your team.

Sure, paying attention to details and ensuring that tasks are completed is important...

And, you may feel that the above are all a necessary part of managing.

But, that level of intensity and scrutiny is not always warranted.

Once a team member is trained in their role, understands their job responsibilities and how they fit into the company's overall vision, mission and goals

...they must be given the space to move within that role.

When skilled and experienced team members are properly recruited, hired and trained properly they will produce bigger results than you may have been able to deliver on your own.

When you begin micromanaging their every move...

You are harming your team’s morale and ultimately – their productivity.

As a CEO and business owner of a growing company,

...your focus and energy are needed in higher-level areas of the business.

You'll want to focus on tasks that ONLY you can do to move the company forward in profit, reach and purpose.

You'll need to figure out that the small stuff is no longer worth your time and begin trusting your team to get things done.

It’s time to get out of the weeds and start spending time on higher-level strategic and profit growing activities that will grow your business into the future.

Can Micromanaging Be A Good Thing?

Actually, as it turns out some level micromanaging can be a good thing under the right circumstances.

But, for a brief period.  It all goes back to the level of intensity.

When new team members are recruited and hired, the CEO leader and/or managers have a responsibility to onboard them properly.

As the leader you want to feel secure the new team member understand their role, the job responsibilities of that role, and how they and that role fits into the overall company vision, mission and goals.

Here's how I deal with the itch to micromanage.

Operating in the role of Integrator, often called a Virtual COO, I recruit, hire and manage my clients online teams.

I've discovered that when I need to step in and temporarily micromanage a task or project I've assigned to a team member, that's an flare over the bow that I need to pay attention to.   Notice I said temporary.

During the recruiting, interviewing and training process for new team members, I always level-set expectations with the team member.

I’m completely open with them regarding my attitudes on micromanaging.  We also discuss how we will hold each-other accountable in a healthy process that best serves our client's business.

As a Second-in-Command leader and manager, it is my role to recruit and hire the right people for the right seats in the business.

The next step is to prepare them to feel respected and supported from the very beginning of their relationship with the company.

They're made aware that if I begin micromanaging them at any time after this initial on-boarding training I'm not feeling secure about something.

They can expect that I'll schedule a call with them, if they don't approach me first so we can get back on track.

I don’t have a hang-up about being in control; it’s not my leadership style.

The power and control I pin my energies to are what we (the team) can accomplish for our client’s business goals and company growth.

My attitude regarding micromanaging...

But, I will when needed for a brief period.

My client’s team members and I maintain solid communication.

They know that if I begin micromanaging after an initial period of training, or presentation of a new project or task, that is a clear sign to them that we need to talk and determine how we need to get back on track in their role.

In the example above the manager leading the team is me.

My clients are women CEOs and business owners whose business growth dictates they hire a Second-in-Command role.  This role supports the business by pulling the CEO out of the weeds of running the business in order to grow and scale their business. 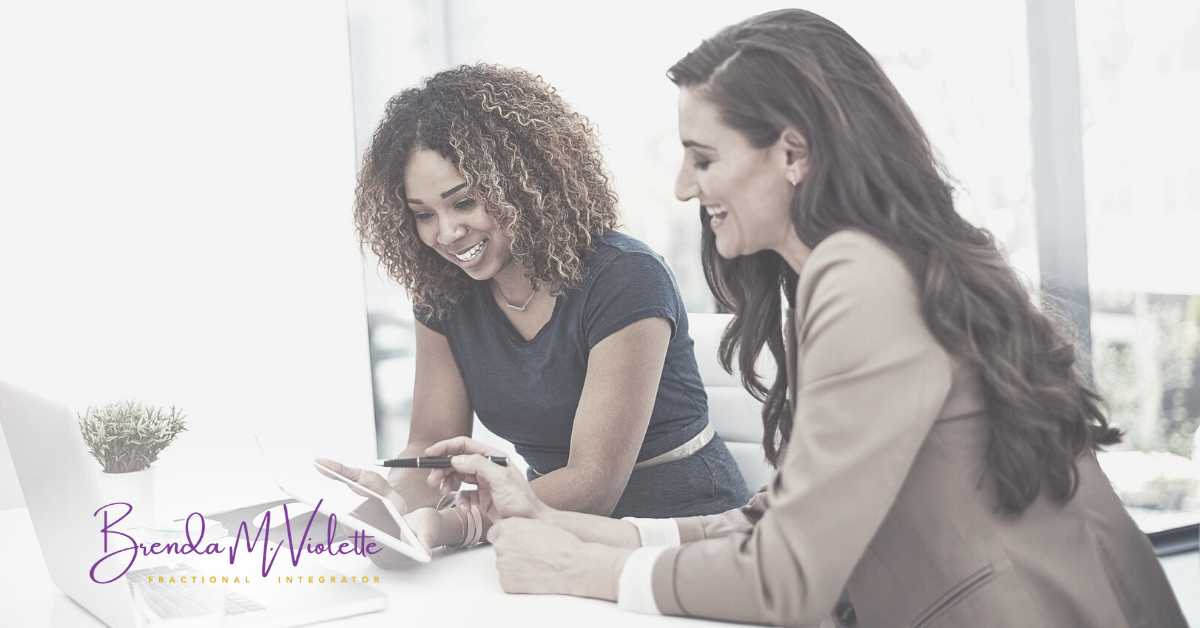 The CEO leader must have the time and innovative energy to focus on high-level tasks that only they can do as the CEO and business owner to lead and grow the company into the future.

Occasionally, in my role as the Integrator, reporting directly to the Visionary, attempts to micromanage my role rears its ugly head.

It’s completely normal for the founder and CEO to feel some pangs of nervousness when beginning to share responsibilities and control of the growing business.

The company is their baby.

In those times open and honest communication is imperative in order to get on the other side of those feelings of loss of control.

This is where we revisit the vision, mission, and goals of the company to recommit to what serves the highest good of the company.

Have you been unintentionally blocking your company’s growth by micromanaging your team?

A leader and manager's job is to provide guidance and support.

I hear it all the time from women CEOs and business owners how they want to build a dream team to support their vision and the company’s growth.

And, sadly, too many continue to spin in their business.

They struggle to gain traction to move forward.  They are still focused on tasks that should be delegated to competent team members and give them the space to bring them the results, they so badly want for their company.

If you're a CEO and business owner who is serious about building wealth, freedom and ongoing success, you must learn to delegate and then let go to grow.

As the CEO leader of the company, you want to be the Visionary leader and “hero” to your team. 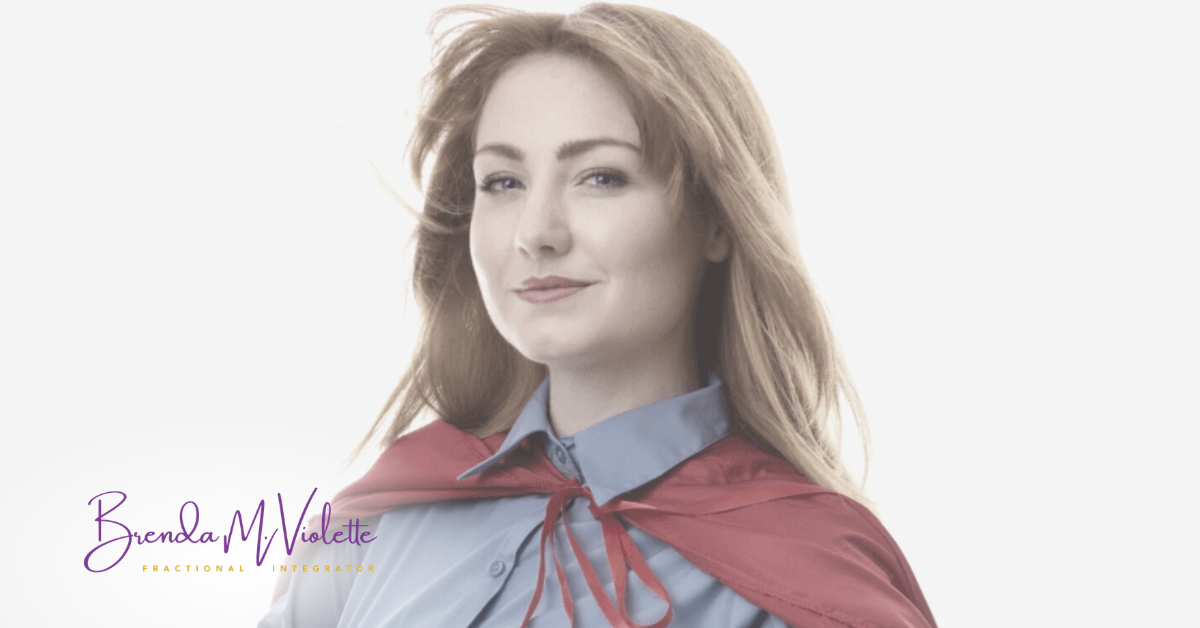 When you hire someone, it means you believe they are capable of performing in the role you hired them for.

Trust them to get it done.

They most likely will not do it the same way you would.  They’re wired differently than you, which is actually a good thing for the business.  They have skills and experience in accomplishing the results you want.  They need the space to show you the value they bring to the table.

You want the amazing results a capable and competent team member delivers for your company's growth.

I would love to get you feedback on this article.

How do you respond to the questions below?  Add your feedback to the comments below.

About the Author Brenda Violette, Professional Fractional Integrator for Companies Running on EOS®

Brenda Violette is the founder and CEO of Violette Business Services, LLC an online business and operations management company serving visionary women entrepreneurs since 2008. Brenda’s core service offering is Fractional Integrator™ often titled a COO. If you are familiar with the book Rocket Fuel by Gino Wickman and Mark C. Winters, you will recognize the roles of Visionary and Integrator. The V/I Duo™. Some Integrators like Brenda, work with companies that need the expertise of an Integrator™ but are not yet ready to hire a full-time Integrator. She partners with business owners generating early million-dollar organizations while sitting in the Visionary seat of the company and running their service-based company on EOS® - Entrepreneurial Operating System. EOS® has become more and more popular in the marketplace. And Brenda loves it because it is a simple and straightforward framework for creating traction and growth for her clients. In the role of Integrator, it is her job to drive the model. She is passionate about helping business owners grow and scale their purpose-driven service-based companies. To learn more about how a Fractional Integrator™ can help you create big growth and sustainability visit www.BrendaViolette.com.

Are All Your Business Arrows Pointing in One Direction?

Are You Ready to Increase Profit and Get Your Life Back?

Are You Feeling Burned Out? Here’s How to Stop Burnout Dead in Its Tracks

Previous Post Are You Feeling Stuck in Your Business? Next Post It Takes a Leader to Create Momentum

Is It Time to Hire a Virtual COO?

Are You Ready to Increase Profit and Get Your Life Back?

Can Your Virtual COO Also Be Your CFO?

Are You Taking Profit First?

Please log in again. The login page will open in a new tab. After logging in you can close it and return to this page.